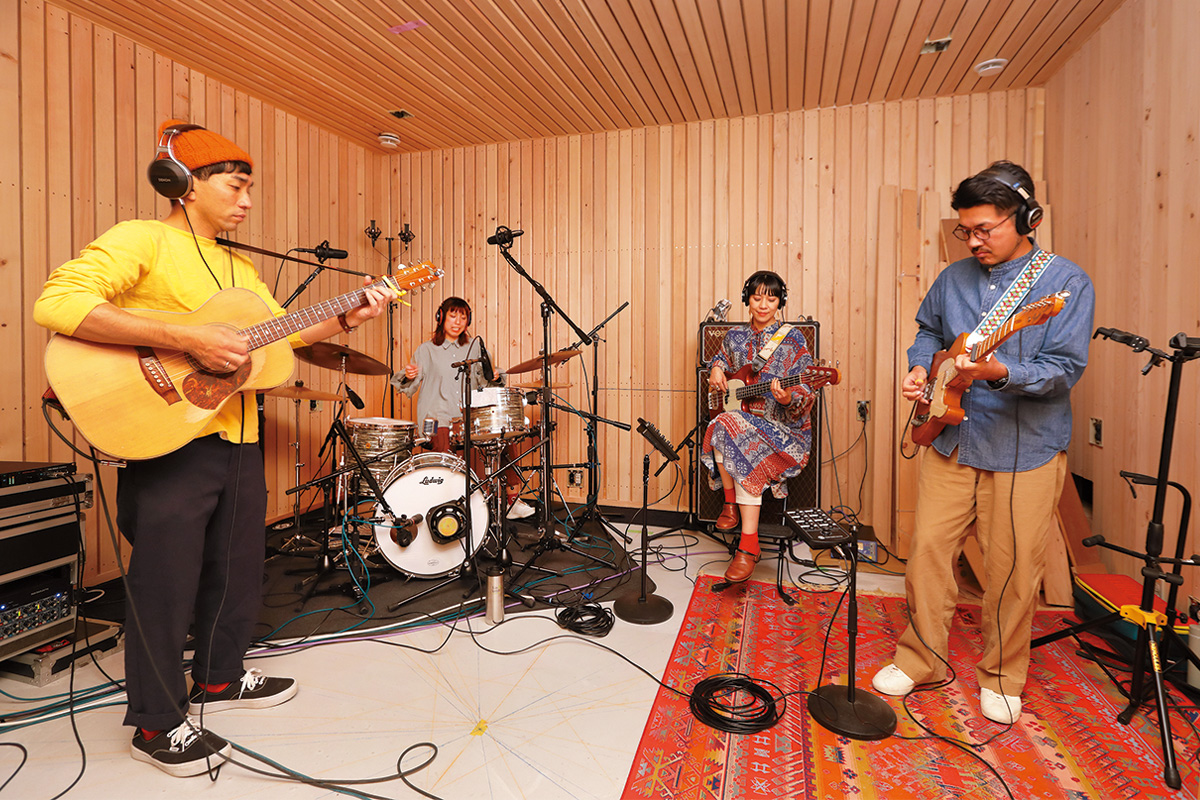 Pro Tools｜Carbon is a next-generation audio interface released by Avid best paired with its Pro Tools music software. Operating over an AVB connection, the built-in FPGA and HDX DSP processors provide real-time processing through AAX DSP plugins to create a near-zero latency monitoring environment. We subjected Pro Tools｜Carbon to a real-world test where its features could be put to good use: a band recording session. Sound engineer Kenichi Koga was brought in, and we enlisted the help of D.W. Nicols, a band with close ties to Koga. The recorded audio and accompanying video have been put up here for readers to review, so please check them out. 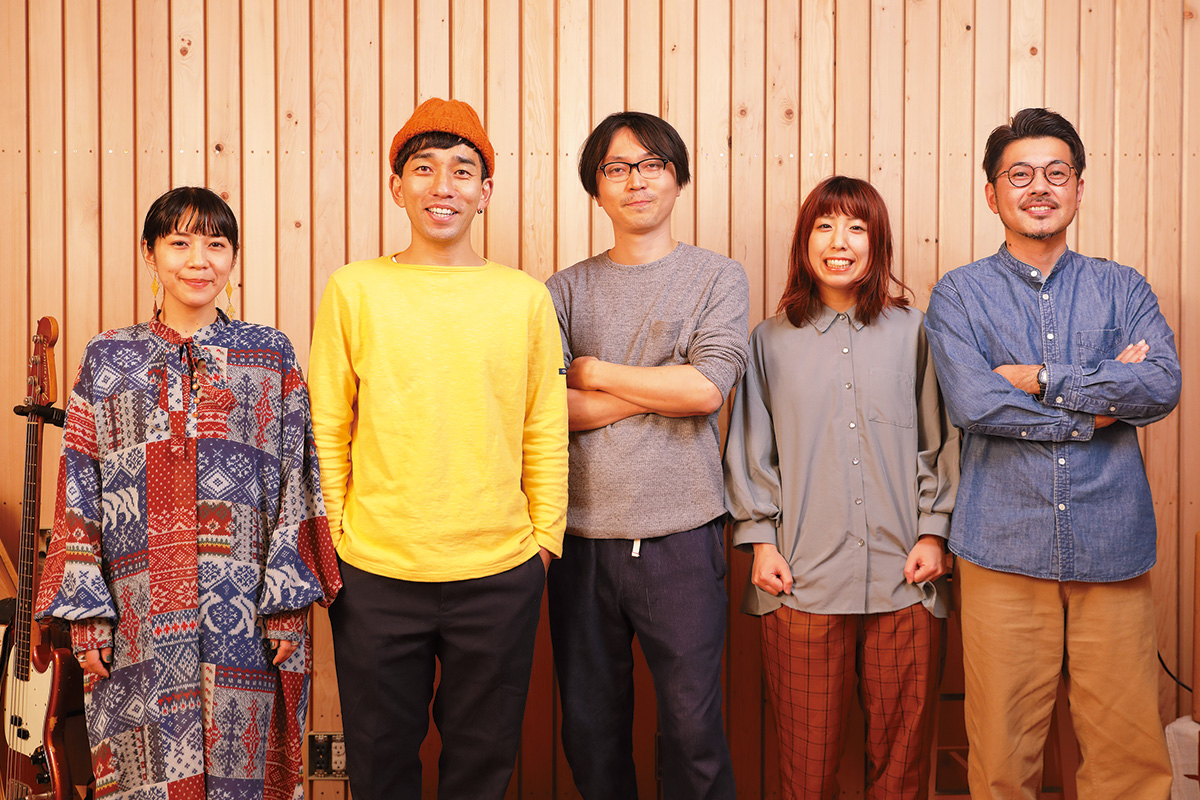 From left: Manan (bass), Daisuke Watanabe (vocals and acoustic guitar), sound engineer Kenichi Koga, Ai Mangyoku (drums) and Kenta Suzuki (guitar). Formed in 2005, they had their major label debut in 2010. Their current roster came together in 2017. With a steady stream of releases and national tours, appearances at festivals and in the media, and songwriting efforts, D.W. Nicols has been broadly active in the music scene. From 2016 onwards, Koga has produced almost all of their music. Their 2018 album "HELLO YELLOW" received acclaim for its "neo-country pop" stylings, a fusion of J-pop and American roots music. They are currently working on a self-recorded acoustic album titled "CRAFT WORKS 2".

Basic Recording
Zero Latency with the Touch of a Button

The recording space to be used was an immersive studio still under construction by Koga (featured in an earlier story). The architectural soundproofing was almost complete, so the space was chosen for this test.

The Pro Tools｜Carbon hardware was installed quickly and easily. While connecting microphones and checking the preamps, Koga comments “These preamps are much better than I expected.” We'll ask more about his impressions later, but to start with Koga is explains his microphone arrangement and recording plan to make the best of these preamps in the band's performance.

“Overall, D.W. Nicols uses a rather basic recording setup. To start, I'll use a Pro Tools｜Carbon preamp for Ai Mangyoku's drums. But for analog input, I'll connect an 8-channel preamp/AD converter through ADAT to get 16 channels of analog in. I plan on getting the whole band's sound together, then later dub in the guitars and vocals from the performance using Pro Tools｜Carbon preamps.”

In Pro Tools, the bit and sampling rates were set to 32-bit/96 kHz. There was concern that recording at 96 kHz may stress the DSP load, but we thought we should try this high sampling rate as a proof of concept.

“When miking the drums for recording through the Pro Tools｜Carbon preamp, I started with a general setup that readers would be familiar with. I've added more mics that I’ve come to use often knowing that members of D.W. Nicols will want to use their audio in post-production. As you can now see, the ADAT I/O expansion was to cover these extra inputs.”

Koga explains that he tries to avoid plugin inserts as much as possible when recording and instead adjusts miking and their settings. Even so, he seems to enjoy that there is no DSP-based monitoring lag.

"In a CPU-native system, you have to perform routing to allow direct monitoring. In this line of work, time is of the essence, and such setup work slows me down. In Pro Tools｜Carbon, by just pressing a button on the Pro Tools screen, DSP processing is enabled, and the latency is gone. I like that it's simple and allows me to continue recording without problems."

Guitar Dubbing
Zero lag even when using a plugin

After basic recording concluded, Koga started overdubs for Kenta Suzuki's guitar backing and solo. The guitar amp that was brought in had one microphone during basic recording, but since extra channels were available, two microphones were used for dubbing. As a matter of course, the built-in preamp of Pro Tools｜Carbon was used. Notably, the Variable Z function was the perfect match for the high-impedance ribbon microphones. It works well with the superior signal-to-noise ratio, making it useful for recording with low-gain ribbon mics. 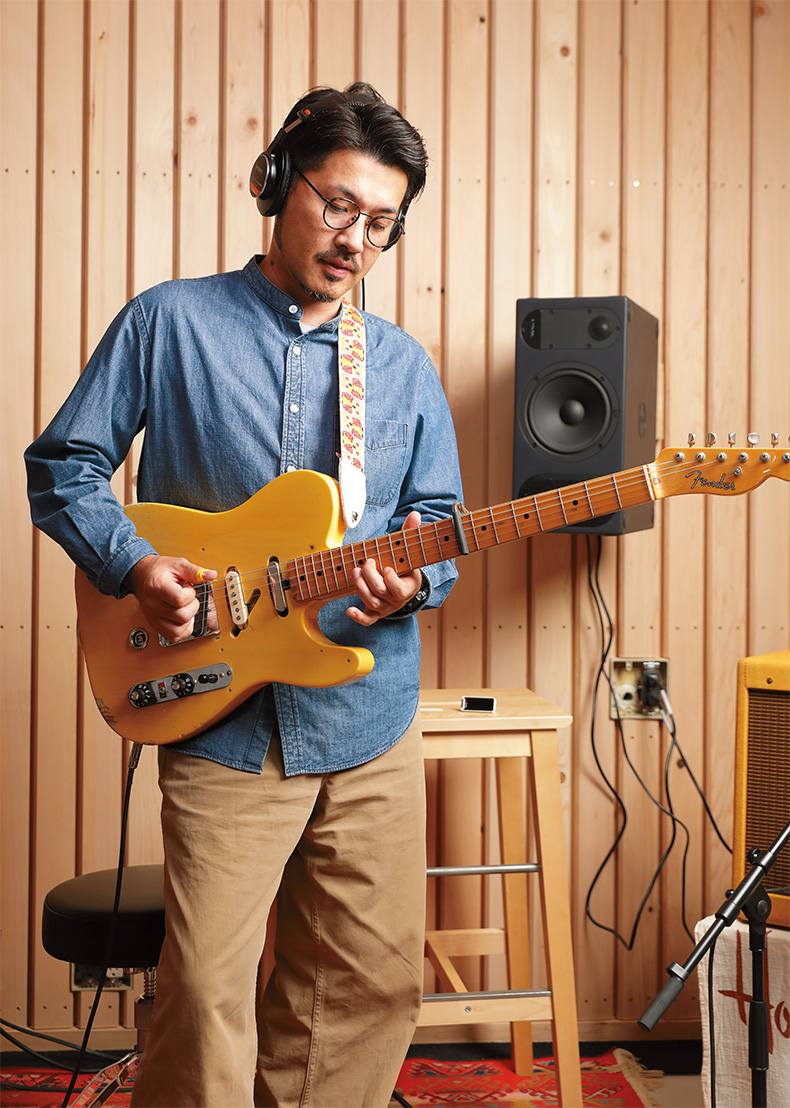 In order to obtain a different character from the backing music for the guitar solos , the guitar was connected to the INST IN on the Pro Tools｜Carbon. We decided to try an amp simulator plugin.

While Pro Tools｜Carbon includes the BRAINWORX BX_Rockrack plugin, Suzuki wanted a crunchier sound, and chose the Eleven MKII plugin included in the Avid Complete Plugin Bundle that also comes with Pro Tools｜Carbon. The Mod Delay III plugin was also inserted. Since both plugins support AAX DSP, by just setting the track to DSP mode, zero-latency monitoring is possible. It could be said that one of the biggest merits of Pro Tools｜Carbon for musicians using guitar amp plugins is its simple solution to eliminating troubling latency. Of course, other plugins (including AAX native plugins) can be swapped in or parameters can be adjusted when remixing.

Next, overdubs were performed for Watanabe's acoustic guitar parts. For the basic recording, the guitar's sound was passed from its internal pickup through a direct input, but now the guitar was miked and recorded again. Recording was carried out with the Brainworx Purple Audio MC77 compressor inserted.

Vocal Dubbing
A great recording from the first take

Now we are finally at vocal recording, and with this being a 96 kHz recording session, DSP resources are running low. Koga has done his best to avoid inserting plugins during recording, with a minimal application of low cut and some compressor as necessary. In addition to plugins, the mixer also uses DSP resources, and as the number of tracks increase, the DSP load increases as well. 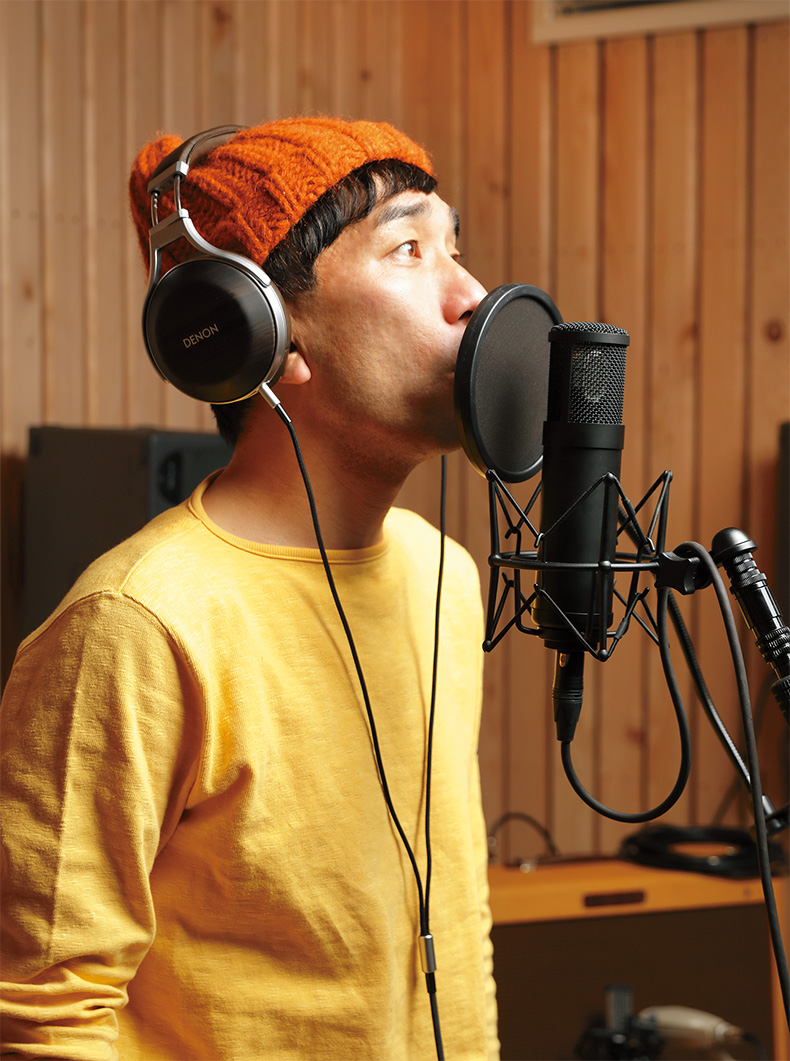 At this stage the recorded tracks are switched to CPU mode (buffer size of 1,024 samples). This frees up the DSP so that the Purple Audio MC77 compressor plugin and BRAINWORX BX_Console SSL 9000J channel strip plugin (owned by Koga) could be inserted. Watanabe was able to nail the recording in one take.

Koga says “For Watanabe's mic, I used a SLATE DIGITAL ML-1 since its character can be changed after recording to match the band's wishes. Watanabe usually is happy with the recording after just 3 takes. As an engineer, you need many years of experience with mic preamp and compressor combinations and levels to anticipate what you will be able to get out of a small number of takes. With Pro Tools｜Carbon, I felt like I could record without any such worries.”

To round out the recording session, three microphones were set up to record the members’ chorus. As with the basic recording, the headphone out of Pro Tools｜Carbon was used in combination with the studio's cue system. With that, recording and overdubs were complete. 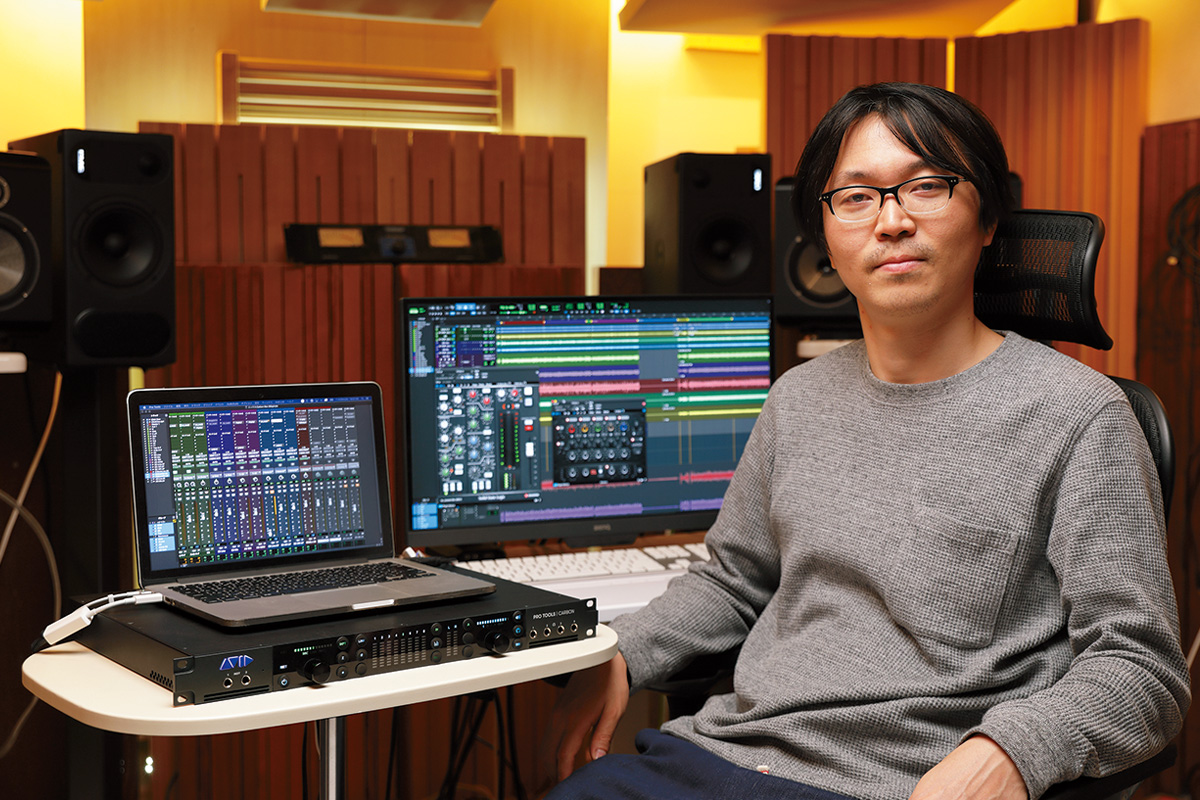 We wrapped up the session with an interview about Koga's in-studio impressions using Pro Tools｜Carbon.

- What did you think of the preamps included in Pro Tools｜Carbon?

Koga: They had a much more musical sound than I expected. I was expecting a Hi-Fi-like or higher-range sound, but I felt like they captured lots of middle-range content that suits recording well. Also, the signal-to-noise ratio was really great. Even with the mic gain up I didn't feel like the gain was high...there was no distortion or hissing noise. The gain is smooth and linear.

- The good S/N ratio is an advantage for you?

Koga: Exactly. These days, the resolution of all equipment is going up, and I think that makes having preamps with a good S/N ratio very important.

- In this session, you didn't use many plugins, but even so is zero-latency monitoring an important factor?

Koga: Absolutely, for both musicians and engineers. In a CPU-native environment, it is a hassle to put together a direct monitoring setup, and it is not realistic to expect to insert plugins when latency is impacted. Adding tracks also increases the processing load. I like that with Pro Tools you can use the DSP even just for the mixer. The members of D.W. Nicols can also perform as they always do...without anything holding them back.

- What functions did you find convenient?

Koga: The front panel was really easy to use. I saw it for the first time yesterday and used it during today's recording, but I liked that I could quickly access a range of functions like channel linking, phase inversion, talk back, and other monitoring tools. It really helps that I don't have to dive into multiple levels of menus to find what I'm looking for. The fan is also quiet. I thought my PC fan was louder!

- In what situations do you see yourself using Pro Tools｜Carbon for your regular work?

Koga: When I do recording work away from my personal studio, it is a real pain to disconnect and bring my Pro Tools｜HDX system out with me. If I had Pro Tools｜Carbon, it has an HDX DSP and zero-latency, so it fits my needs perfectly. Since we recorded at 96 kHz we had only 16 channels, but if I combined Pro Tools｜Carbon with two 8-channel mic preamps using ADAT connections, I could get 24 inputs...you could record almost anything with that. There are 4 channels with Variable Z preamps, which allows for a lot of tonal variety. You can take it to a rehearsal studio and use it there, but I think it would be at home in any professional recording studio.

This article is also available in Sound & Recording Magazine, Feb 2021. 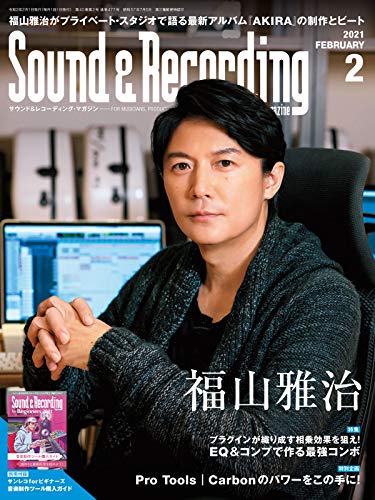 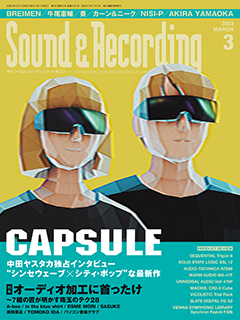 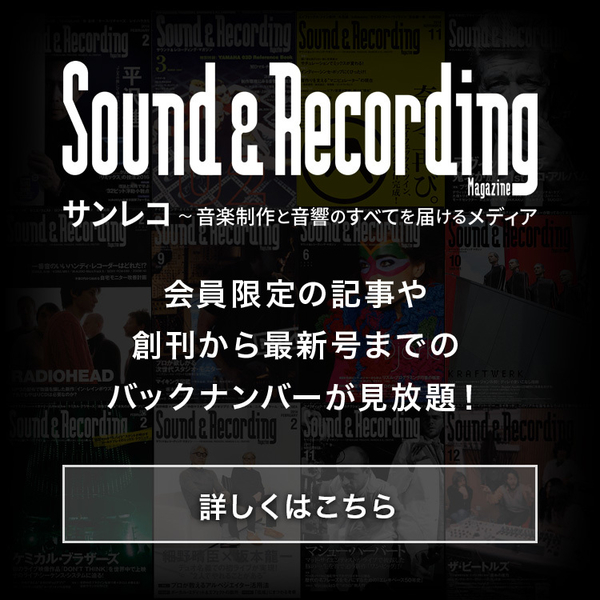